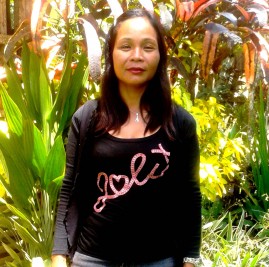 Community connections and leveraging local leadership are key to the success of Green Empowerment. Today we introduce you to Tata: a Barang Councilor, or village leader, in Maligue, Isabel City, Basilan. She has been integral in her community receiving access to clean water. She is also a role model for young women everywhere, as she has overcome abuse and shame and channeled that energy into improving her community. Here is her story as told by GE Philippines staff.Tata Garcia Pic

Tata’s smiling and bubbly personality is endearing to many, but it is her courage as a woman that earned her the respect of her constituents. Married at the young age of 17, she was dependent on a husband who took advantage of that power and was abusive. She endured the abuse for many years out of fear of being alone and of having to endure the public shame and ridicule that would come with being alone. After a number of years, her husband left her and their two children for another woman. Instead of giving in to her neighbor’s taunting or comments about her status, she accepted her fate and began to see herself not as a pitiful wife abandoned by a husband but as a free woman who decided to take care of herself and her family. As part of this personal growth, she became a Barang Councilor and started working with Green Empowerment’s CREST program to increase access to clean water for her community.Tata Working

Ram pumps and her village

One of the key elements of Green Empowerment’s work in the Philippines is the installation of ram pumps. This is a technology that uses gravity to pump water uphill to provide access to clean water closer to villagers’ home. Tata was integral in establishing a strong relationship with her village. She set up meetings with leaders and supported the coordination of the installation of the technology. With the completion of the ram pump in Maligue, Tata has seen things change in her community and also in her own life. “Before it was difficult because the water source was far away and fetching it took a long time. With my busy schedule I often had to pay someone to get me water because I did not have time.” She went on to explain how the new water system not only saved her time but also “helps her to keep herself and her home clean.” The changes Tata experienced, saving time on accessing water and improved hygiene, are core elements of Green Empowerment’s CREST program.GE is working with local leaders and establishing a sense of ownership of the technology throughout the community. GE is providing access to clean water, supporting the leadership and skill development of local leaders, and most importantly breaking down barriers that villagers face, before they can thrive as local politicians, engineers, mothers or business owners.

Posted in Blog, News From The Field, Philippines, Water