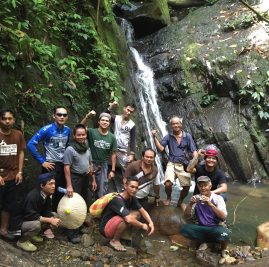 By: Koto Kishida, Green Empowerment Malaysia Program OfficerAs part of our continuing efforts to support local indigenous communities in Malaysian Borneo in resisting the construction of destructive “mega-dams,” Green Empowerment and our long-term partner TONIBUNG are starting work on a microhydro system to power the community of Long Liam via renewable energy. Long Liam is a village located on the Baram River in the state of Sarawak. The settlement is occupied by approximately 200 individuals (41 households) belonging to the indigenous Kayan ethnic subgroup. Green Empowerment (GE), TONIBUNG, and our Sarawak-based partner NGO, SAVE Sarawak Rivers, began working with the village of Long Liam in October 2017 to establish an affordable and renewable source of electricity, and held the official kick off ceremony for this project on November 27, 2017. The system that is being constructed through the GE/TONIBUNG project will provide 24-hour renewable electricity to the community, achieving the following: – Reducing current costs of electricity by up to 500%- Providing domestic lighting and electronics charging for all residents, as well as shared refrigeration- Offsetting CO2 emissions from generators and kerosene lampsThe project also incentivizes the protection of the local forest watershed. Green Empowerment and TONIBUNG have a formal agreement with the community to build a 10 kW microhydro system in exchange for the community’s ongoing protection and monitoring of at least 220 hectares of forest land. In addition to the traditional conservation measures that are already undertaken by indigenous communities such as Long Liam, we and our partners will provide the community with supplementary training in environmental protection and monitoring so that they can manage this role more effectively and document their results. This is part of a larger effort by Green Empowerment to better evaluate and document the environmental impacts of our projects in Borneo.The Baram Movement:

A protest organized by SAVE Rivers against the Baram Dam

The community of Long Liam does not take their land and forest for granted. Just two years ago, the residents were not sure whether they were going to be pushed out of their ancestral land. In 2009, the Sarawak state government and national utility announced that 10,000 residents of the Baram River, including the inhabitants of Long Liam, would be displaced to make way for the proposed Baram mega-hydroelectric dam. In response, SAVE Rivers led a community-based campaign against the dam. GE, TONIBUNG, and other NGOs supported these efforts by working with UC Berkeley’s Renewable and Appropriate Energy Laboratory (RAEL) to propose alternatives to mega-dams in Sarawak. This collaboration resulted in a series of “Alternative Energy Options” reports that were circulated amongst government officials and the other institutions concerned. In 2015, after SAVE Rivers, GE and RAEL representatives met with the state’s chief minister, the plans for the dam’s construction were placed on hold indefinitely.While the main objective of this project is to provide Long Liam with a clean energy system that supports conservation locally, it is part of a larger strategy to operationalize the findings of the alternative energy options reports. One of the findings of these reports was that the entire Baram basin could be electrified efficiently through the deployment of solar PV and microhydro systems.While the mega-dam is off the table for now, Baram residents have reported an increase in illegal logging activity. This unfortunate trend can, in part, be attributed to the death of the previous chief minister, who made the decision to halt dam construction and pledged to curb illegal logging, early in 2017. The new chief minister is not yet convinced of the importance of committing to strong environmental conservation measures and the support of indigenous communities. This sequence of events makes this a critical time to prove the viability of distributed energy alternatives. TONIBUNG and GE have led the development of over 30 community-based energy systems across Malaysia over the past 17 years, four of them in the Baram, and we have a few more projects in the works. Project Updates: With the goal of completing the project by the end of the year, the community members have been working on collecting materials for the intake and power house, such as timber, sand, and rocks as fill materials. In early January, TONIBUNG organized a communal work party to prepare the sites and start building. Many of the community members participated, including youth, men, women, and the elderly. There will be many more of these work parties in the coming months.

To promote the protection and conservation of Long Liam’s watershed, GE and TONIBUNG are planning the following environmental activities in 2018:- A watershed monitoring workshop for community members- Discussions with the community to develop a formal watershed protection and monitoring plan, preserving at least 220 hectares of forestStay tuned for future project updates!