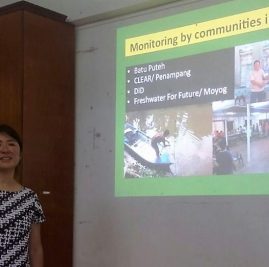 This guest post was written by Koto Kishida, a Green Empowerment volunteer and Natural Resource Specialist with the State of Oregon.Sabah, Malaysia was my home for several months in 2016. As a volunteer for Green Empowerment (GE), I helped develop and kick-start a monitoring program for GE’s local partner Tonibung. The project had an ambitious timeline, but with the help of motivated colleagues and community members, we were able to make good progress. How it started…I had traveled to SE Asia several times in the past and was drawn to traditional ways of living. During my travels I saw rapid development and emerging environmental issues that threaten such ways of life, and I wanted to support local communities who were trying to address them.Gabe, the Regional Director for GE’s Asia program, responded to my email requesting a volunteer assignment. After a Skype call and a few email exchanges, he offered me the opportunity to volunteer with GE and Tonibung in Malaysian Borneo.

Communities in Ulu Papar, nestled within the Crocker Range Park in the Malaysian state of Sabah, are facing uncertain futures for a couple of reasons. Several villages will be displaced if a dam is constructed to provide drinking water for the coastal city of Kota Kinabalu. Other communities may lose access to their traditional hunting grounds. The negotiations with Sabah Parks for the management of Community Use Zones have stalled. The projectTo provide evidence to the local government of the communities’ ability to effectively manage and protect the forest, Green Empowerment decided to enhance the monitoring and evaluation (M&E) aspects of its work in the region. Specifically, GE included an enhanced M&E component in a grant proposal to install micro-hydro systems to provide electricity to several villages in Ulu Papar. I was brought in to run the monitoring program. From my experience with community-based monitoring projects in the US, I knew it was ambitious to start a monitoring program in a few months. It often takes years to launch a community-based monitoring program in Oregon, and we were starting from scratch. I advised Banie, the founder and Executive Director of Tonibung and my supervisor on this project, not to rush the process and to take more time to build up from a solid foundation. I knew we did not want to force the communities to collect data and submit reports. What would we do, threaten to shut the turbines off if community members did not comply? Of course not. Banie understood the risks but felt strongly that the communities could be inspired by the power of information and come through. Banie’s conviction was contagious and I moved forward with the project. I spent the first couple of months doing research on water-related programs in Sabah. I also spent a lot of time researching and talking to my colleagues about a suitable monitoring program for micro-hydro systems. And as opportunities arose, I accompanied my colleagues to their project sites in indigenous communities.

Part of the new microhydro system in Ulu Papar

About a month into my stay in Sabah, I went on the first trip to the pilot project site Ulu Papar with a group of Portland State University faculty and students. They were there to help construct micro-hydro infrastructure in the village of Kalanggaan and to learn about issues facing indigenous communities in Borneo. The community of Kalanggaan is tucked deep in the Crocker Range. The road built for the rubber plantations ends before reaching the village. The village is located above the submerge zone of the proposed Kaiduan Dam, but the community faces uncertainties around having access to their forest due to the government’s establishment of Crocker Range Park. Even though I have been an avid hiker in the Pacific Northwest, I could barely walk in the steep terrain and river crossings of Ulu Papar. Watching me struggle to take each step often compelled the community members to make me a walking stick out of nearby vegetation or hold my hand. Even though it was challenging, being at the pilot site provided needed context for the monitoring program. The presence of steep terrain is a requirement for micro-hydro systems in order to utilize the hydraulic power to generate electricity. Also, headwater streams in Ulu Papar were well preserved due to having almost no human activity in the park. These observations helped me narrow down the methodology for monitoring. Thanks to the hard work of the community members and help from the visiting PSU students, the micro-hydro system in Kalanggaan became operational during our stay. It was both comical and heartwarming to see community members, young and old, all gather round to gaze with excitement into a small screen TV with karaoke videos. Before the micro-hydro system was built, the sources of electricity in the community were limited to a few solar panels – enough to light a few lightbulbs or charge mobile phones. More importantly than the year-round access to the karaoke system (though some may argue otherwise), having electricity will allow the village children to study in the evenings and open new economic opportunities. Having seen that moment and getting to know the community members like Judy, Marinus, Jhon, and Mavinus gave me the motivation needed to make the pilot a success. After the trip, I powered through and drafted the Tagal Hutan monitoring program. I worked on the program framework, monitoring methodologies, program and presentations for the upcoming workshop.

In the same time period, the community leaders in Ulu Papar built a blockade to monitor and limit access to the area to delay the Sabah Water Department from moving forward with the Kaiduan Dam Construction Project. The communities in Ulu Papar began a 24 hour watch at the blockade and held events to bring the communities closer. Unfortunately, this required a great deal of time and attention from Tonibung staff members to help coordinate, resulting in diminished capacity to focus on the monitoring project. The monitoring workshop held at the blockade site at the end of May drew a large crowd for area with attendees from all communities of Ulu Papar. Community members were engaged and motivated to document their community’s Tagal Hutan (prohibitions on watershed/forest use) and monitor watershed conditions.

Participants in one of the monitoring workshops

Unfortunately, after the first workshop we encountered challenges due to a lack of Tonibung staff time. With local support we completed the additional two workshops. The rest of the workshops were not as well attended, but drew in community members who were motivated to support the monitoring project. Even though I was concerned about not having done as much outreach and planning with the community, I was encouraged by the groups of volunteers. With the right amount of follow up, I knew the monitoring teams were ready to collect data. Since leaving Sabah, it has been challenging to support this type of work from a distance. Without key staff to dedicate to the project, how will Tonibung support the Tagal Hutan monitoring program now? I don’t have an answer, but what is certain to me is community members in Ulu Papar have to continue to protect their watersheds. It may now take longer than we had initially hoped to take the next steps for the monitoring program. But I am hopeful that people will continue to live by Tagal Hutan. The program will be back on track and further develop at a pace that is more realistic.