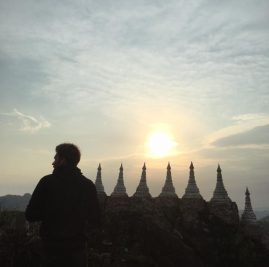 [Conducted by Eleanor Burke. Questions and responses edited for brevity and coherent continuity.]Patrick graduated from Purdue University in 2014 with a degree in Civil Engineering. While studying there, he participated in a team collaboration to develop a locally sourced, locally fabricated micro-hydropower facility in the rural community of Bangang, Cameroon, where he gained his early lessons in micro-hydropower (MH) as a sustainable energy solution for rural communities. He carried these lessons on to his work with Green Empowerment, first as an intern for our partner organization Tonibung in Malaysian Borneo, and more recently as a GE Fellow in Myanmar, where he spent a year exploring the possibilities for GE collaboration in developing MH facilities for rural villages with no other access to electricity. The opinions he offers are his own, and not necessarily those of Green Empowerment or of the other networks mentioned in this article.How did you decide to focus your work on micro-hydro solutions to rural development?I’ve always been intrigued by small hydropower production—especially with all the new technologies coming out. I love to geek out on solving the engineering problems—and nothing can match the cost per kilowatt of micro-hydro, if it’s done right.Fresh out of a one-year internship, you took on a Fellowship assignment as GE’s solo man-on-the-ground to explore MH possibilities in Myanmar. How did that feel, starting out cold and alone, and not knowing the territory?It felt cold and alone! But I had a good foundation to stand on. Shortly after graduation in 2014, I had worked as a “deck hand” at an HPNet practice-to-policy event in Myanmar. I photo-documented the event, and was fortunate to meet a number of local MH developers. Volunteering at that conference planted the seeds for my fellowship work this past year. (HPNet = Hydro EmPowerment Network, a community of MH actors whose mission is “Knowledge exchange for Community Micro Hydro in South and Southeast Asia.”)Two key people paved my way into the MH community in Myanmar. GE’s Asia Regional Director, Gabe Wynn, had already established a solid landing environment for me. And HPNet’s Coordinator Dipti Vaghela guided my path to getting settled here. She also wasn’t shy about telling me the DO’s and DON’Ts about this work. What sort of DO’s or DON’Ts did she recommend?

A group of local technicians learn to use a piece of equipment during a training session on microhydro technology.

My early mentality was: “Find funding! Establish partners! Identify tech transfer opportunities!” But Dipti taught me that it’s not always about planting a flag for the rest of the world to see. Sometimes it’s important to stay behind the scenes. Together with local developers we wrote a proposal to the biggest players—in the government and various bilateral development partners, for a Development Plan for Micro and Mini Hydropower Implementation of the NEP of Myanmar, using a Public-Private Partnership Approach. It lays out a plan for the best chance for the MH sector to become sustainable. She taught me the important nuances of this proposal coming from local developers, not outside agents or NGOs. So the Small Hydro Power Association of Myanmar (SHPAM), a local practitioner’s association, authored the proposal, and we kept largely to the background.What do you see as the most pressing issue affecting MH development in Myanmar?Definitely the National Electrification Plan (NEP). It’s an ambitious plan which calls for 99% connection to the national grid by 2030, whereas currently only 30% of households are connected. The 1% not included in the grid-extension area would mostly access electricity through solar home systems, because they are too remote to connect to the grid before 2030, or maybe ever. The target for sustainable MH mini-grids is primarily the half-million households in the “pre-electrification” zone, where their connection to the grid is 10-15 years out. MH is preferable to solar home systems for several reasons. Locally manufactured and maintained, it creates jobs in the local economy. And unlike solar, it runs both day and night, so it can power both income-producing end-uses like cottage industries, pumps, and rice mills, as well as evening household needs, and socially important facilities like schools and health care centers. There are many—-somewhere around 1,000—-MH mini-grids built by private sector actors in Myanmar over the past 30 years, at a time when the former government was not paying much attention to rural electrification. These community-owned mini-grids are facing an uphill battle, because solar home systems can be implemented more quickly and on a larger scale than technologies like MH or biomass gasification, and the anticipated encroachment by the national grid is a disincentive for many MH mini-grid developers to pursue high quality sites, except in the most remote regions of the country. It isn’t clear what the new democratically elected government, led by the National League for Democracy (NLD), will do next. We hope to support our local partners, primarily the Renewable Energy Association Myanmar, make the case for MH mini-grids, and decentralized renewable energy solutions in general, as part of the new government’s energy planning process.After your year of internship in Borneo, you blogged that “nothing trumps the culture element in community Micro Hydro. It is the single most accurate predictor of project success and failure.” Is that still your main takeaway, after a year in the field in Myanmar?

Patrick with local contact Kyi Phyo on a weekend trip to assess damage to the community MH system in Da La Pin village, Ywar Ngan after a severe hail storm.

The private sector approach, with local businesses investing and developing community MH is a “must do” means to an end; without it, community MH will cease to exist. But I don’t see the local private sector as stewards of community. The CSO sector (Civil Society Organizations), the community activists are stewards, promoting social environmental justice as their primary mission to counter the narratives of large dams and extraction mining, for example. But they are not implementers of solutions, and they don’t see MH as the “be-all-and end-all” answer.Green Empowerment can play a mediating role in this dialogue to bridge the divide between the activist-driven CSO sector and the local private sector. This wouldn’t be my preference of the ideal model for development, but things are happening so quickly here with the dynamics of the NEP, that we had to work quickly on proposing viable village-level alternatives to large-grid NEP adoption.With talk of the NEP rollout, I detect an urgent, almost religious dedication to village Micro Hydro mini-grids as an alternative to a mega-dam based energy planning strategy. Is it more than just a love of the engineering challenges that is motivating you?Yes. Successful MH is not about the numbers. As much as I love the concept of MH as an alternative to mega-dams, I am realistic about the limitations of MH application, and the fact that all of the country’s existing MH plants combined amounts to a relatively insignificant increase in national power supply. The dominant reason I am in this work boils down to understanding what community can do with this technology when they come together, leveraging a robust, existing social fabric. For example, they can create local media, reverse the emigration trend to cities, retain local cultures through storytelling, and improve women’s economic situations. These local private sector developers have a big emotional investment in their community-owned MH systems, which they built and maintained for over 30 years on their own, without the [former military] government’s support, and without financial or technical support from the international community. They take great pride in the quality of their work, the longevity they have achieved, and the creation of local jobs to manufacture and maintain them. And when they can use the decentralized electricity to power local businesses like a rice mill or a tea-processing facility, they can generate profits that make their mini-grid viable and boost the village economy.As the national grid begins to reach townships that have been relying on community-owned MH mini-grids for years or even decades, both local private sector developers and activists, and supporting organizations like Green Empowerment will be watching closely.

Posted in Blog, Electricity, Myanmar, Networks, News From The Field