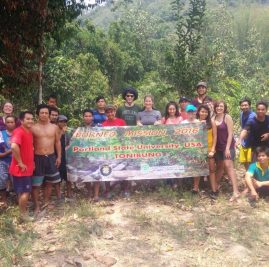 Along the forested Papar River in North Borneo’s Malaysian state of Sabah, many indigenous communities still practice riparian lifestyles much the same way they did hundreds of years ago. Land and forests are central to the survival of these tribal people, making them committed environmental stewards with systems of sustainable resource management that have lasted for centuries. Unfortunately, among the densely forested highlands of Sabah’s Crocker Range National Park, the people of Ulu Papar are confronting increasing challenges to the natural resources on which their livelihoods and way of life depend. In the last few decades, outside pressure to convert forests to cash crops or sell land to oil palm estates and timber companies has had (and is still having) a devastating effect on many of these communities.

In March 2016, seven PSU Honors College students and two faculty supervisors traveled to Ulu Papar to participate in one of Green Empowerment’s service-learning trips. Led by GE’s Asia Regional Director Gabe Wynn, the group spent approximately a week and a half traveling through the area, learning about the local communities, cultures, and ecosystems, and turning their hands and minds to discover how groups like theirs can work with locals to help preserve these vibrant and vital sources of life.With support from GE’s local partner organization Tonibung, the students first traveled to the village of Kalangaan in Ulu Papar to spend several days helping Tonibung and local community members finish work on the micro-hydro system there. Once completed, they got to join in the festivities held by the community in celebration of having electricity for the very first time. After Kalangaan they traveled to the village of Buayan, where community members from all across Ulu Papar gathered to stage a protest against government plans to build the Kaiduan Dam in the Papar River. If construction proceeds as planned, the dam will flood all the villages in the area—including 6 past Tonibung/Green Empowerment projects—and will displace over 1,000 indigenous people.

Activists are calling on the government of Sabah to reconsider the proposed dam, saying the Infrastructure Development Ministry has not considered other solutions to Sabah’s looming water crisis and has failed to consult with the indigenous people who will be displaced if the project proceeds. Though they face an uphill battle, the recent cancellation of plans for a similarly destructive mega dam in the neighboring state of Sarawak provides some hope. Green Empowerment supports these efforts by connecting communities and activists to renewable energy solutions that provide reliable, environmentally friendly alternatives to mega dam projects, and by lobbying government representatives to adopt such solutions into local, state, and national policies.The group also visited the Kivatu Nature Farm at PACOS Trust, a community-based organization dedicated to supporting indigenous communities in Sabah. The Kivatu Nature Farm is a model farm and training center for communities who wish to learn about organic and sustainable farming and agricultural practices. It also acts as a propagation venue for various traditional plants, flowers, vegetables and citrus trees, the seedlings of which are sold to local communities at low prices. PACOS also provides programs in community organizing, socioeconomic development, community education, natural resource management, land rights, and cultural preservation. Now back in Portland, the students and faculty supervisors have had some time to reflect on their trip. Though traveling through the jungles of rural Borneo could be quite challenging, overall they noted that it was “not a typical study abroad program,” and provided them with “an incredible, authentic cultural experience” that they would never forget.