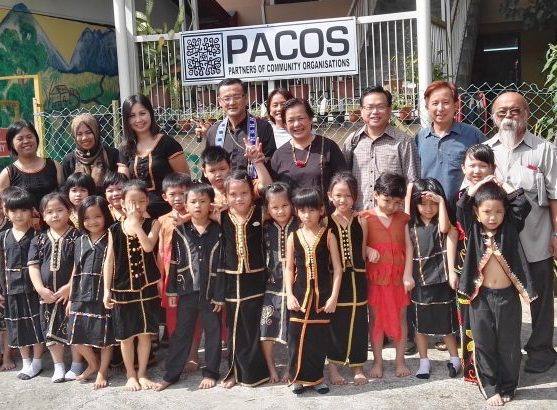 Even as a young child, Anne Lasimbang spent time collecting funds from neighbors to support families in need as well as distributed information related to pertinent community matters in support of her mother’s community organizing. Growing up in the village of Nampasan in the Malaysian Borneo state of Sabah, Anne never envisioned she would eventually run an NGO with a footprint in over 500 communities in the region.

Anne is now the Executive Director of Partners of Community Organizations in Sabah (“PACOS”) Trust, a community-based organization and Green Empowerment partner, that originally formed out of a student-led movement that Anne established while attending university. For over 25 years, PACOS has been empowering indigenous communities in Malaysian Borneo through capacity building programs focused on education, human rights and the environment.

Green Empowerment began working with Anne and PACOS in 2001 due to their strong awareness of the needs of, and their close relationships with, Malaysia’s grass roots. With Anne at the helm, PACOS and Green Empowerment first implemented a micro-hydro system that provides clean, reliable, twenty-four-seven electricity to the community of Long Lawen, Sarawak. This project catalyzed the creation of TObpinai NIngkokoton koBUruon KampuNG (TONIBUNG), Green Empowerment’s other Malaysian partner organization that has since become a regional expert in renewable energy. Most recently, PACOS deployed biogas digester technology, with the support of Green Empowerment, to provide organic fertilizer and clean-burning biogas for cooking fuel to several communities in the Penampang district of Sabah.

We recently spoke with Anne to learn more about her upbringing, her impressive career as a community organizer as well as her advice for Malaysian youth looking to follow in her footsteps.

Where did you grow up and what was family life like for you?

Anne: “I grew up in Nampasan, a small village by the Moyog River in the Penampang district. There was no electricity in Nampasan until I was in Primary 3 and we gained access to running water when I was in Primary 5. Road access into the village came much later after I graduated from university. I’m the oldest of 13 children, so I would spend a lot of my time looking after my siblings while my mom handled house work and went to the market. For as long as I can remember, my mom was a strong community leader and instilled that passion and drive in myself and my siblings at a very young age.”

Why did you found PACOS?

Anne: “I had long been aware of the exploitation of natural resources in my country. I sought and received a scholarship to study topics like this and human rights. I became very involved in a student-led movement focused on protecting the environment and exposing the political and socioeconomic disparities throughout Sabah.

After I graduated from the university, I formed a community organizing group that was eventually named the Project on Community Awareness in Sabah. Our aim was to organize different communities through our group so that they could work together to overcome some of the most pressing issues in Sabah. PACOS was then formed out of this group in 1990. Originally, it was just a passion project, as my friends and family and I who were part of PACOS recognized our privilege and wanted to give back to the communities we came from. I never imagined that I would give up my profession as a teacher to pursue my work with PACOS full-time.”

What is some of the work that PACOS Trust has done that you are most proud of?

Anne: “I’m quite fortunate to have had the opportunity to be involved in a wide array of projects that have impacted the lives of fellow Malaysians. Given my passion for education, particularly as this was what led me to my current path at PACOS, I’m proud of having lobbied to provide early childhood education for our indigenous children in remote areas of Sabah and Sarawak. We also have developed over thirty community learning centers that promote indigenous knowledge in addition to standard youth curriculum. We’ve also revitalised indigenous knowledge on care for the environment. We have strengthened food security and land rights and built new peoples’ organizations among the communities as well as new NGOs like TONIBUNG and, Forever Sabah.”

What advice do you have for young Malaysians who want to follow in your footsteps and become a community leader in civil society?

Anne: “There is such a great need for Malaysian youth to become more engaged in community organizing, particularly as the gap between the haves and have nots is becoming greater, including in urban areas too. The first thing I’d say is don’t be afraid to fully understand the current situation in Malaysia, including the positive as well as the negative. The second thing I’d say is to focus on people and community, rather than consumerism and a lavish lifestyle, as the latter tend to distract you from what is truly important in life. Research areas you’re interested in in which you can make a difference, such as climate change, human rights, and access to clean energy and water. We need more Malaysians to represent our country at important international meetings with organizations like the United Nations and others. Have the courage to believe that you can directly help your communities if you set your mind to it.”

A critical aspect of Green Empowerment’s organizational model, and the strongest driver of the long-term sustainability of its projects, is developing strong, long-term partnerships with local leaders and organizations. Green Empowerment is founded on the principle that it’s not only more effective, but essential, to channel resources to local leaders and organizations in the field like Anne and PACOS, who are best equipped to understand the needs of local populations. Green Empowerment has been fortunate to have had the opportunity to develop such a strong partnership with PACOS over the years under Anne’s dedicated leadership. Green Empowerment is currently working with PACOS to pilot a new clean water program in Malaysia and looks forward to developing additional impactful projects with PACOS in the near future.