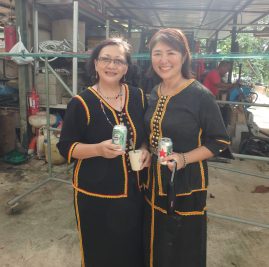 This guest post was written by Koto Kishida, a Green Empowerment volunteer and Natural Resource Specialist with the State of Oregon. Green Empowerment’s last blog post (“Tagal Hutan Monitoring Program in Borneo”) was about Koto’s project for GE and Tonibung in Malaysian Borneo. This post will focus on her personal experience of living in Borneo and immersing herself in the local culture.Six months in Sabah flew by. During the whirlwind of my stay, people reached out to me and we formed friendships that I sense will last our lifetime. My days filled up quickly, and I spent most of the time near my home and office. I lived with Jannie (a sister of Tonibung’s founder and director, Adrian Banie Lasimbag) and her son in Nampasan, a Kadazan village close to Tonibung’s workshop and Dodu (Jannie’s mother)’s house. Dodu’s house is called “the Nest” and Jannie’s siblings and their families are always there napping, eating and visiting. It was the center of my social life, and I spent many weekends and evenings there, cooking, eating, and visiting with the family. My office was located in Donggongon outside of Kota Kinabalu. Donggongon is the center of commerce for indigenous communities living traditionally in the interior. “The market” held on Wednesday afternoon through Thursday is full of indigenous vendors selling forest and farm products as well as traditional necessities from the interior. The biggest building in town is a shopping mall called Megalong, the longest mall in Sabah. It is filled with hair salons, mobile phone vendors and shops selling steamed corn. I often ran into youths from project sites at Megalong, and chuckled that teens in Sabah were much like my young friends in the US.

The red star indicates the location of Kota Kinabalu within Sabah.

One of my favorite parts of the workday was having lunch with my colleagues. I usually ate with Jannie, my landlord/mentor, or Kila and Vera from Tonibung. Jannie and I liked to go out for noodle soup, and Kila, Vera and I often ate at the Chinese tea shop just downstairs from our office. As with many people in the area, Jannie, Kila, and Vera are fluent in English. I enjoyed sharing about challenges at work, commiserating on politics and corruption in our home countries, and hearing gossip about their crushes and people I didn’t know.

Being in Nampasan also gave me the opportunity to learn Kadazan culture. Mama Moi let me help her make Kadazan ceviche called Hinava (delicious), and Dodu and Angka taught me a secret way of making rice moonshine so it turns sweet and not sour. Jannie and Yoggie showed me how to hand trim forest vegetables. During the harvest festival I learned how to pace my drinking and try to dance like soaring birds. At the Nest, Dodu shared many stories: about a time she gave a mango to a malnourished Filipino boy because she couldn’t take a bite while he gazed toward her; the murder of her father by a Japanese solider who was his neighbor during occupation; what Nampasan looked like in the 80’s when the family had rice paddies… Her stories helped me put real faces to what I had known from books about the recent history of the region.

A candid shot of my host family

Some aspects of Kadazan culture are much harder to learn, like meeting their level of generosity. My friends and neighbors were always friendly and offering to share, and became extremely generous during festivals and celebrations. They insist on giving everything even when it’s not necessary. I didn’t want to practice such extreme generosity, but hoped to be generous enough to be proper. It is, however, much harder to practice in the moment. For example, I had made a small batch of moonshine and was very excited by how it had turned out. When my friend came over to taste it, I gave out a small portion, thinking he just needed a taste. After he left, Jannie joked that my serving was too small to be considered a Kadazan drink. She kindly reminded me I was not even close to being generous.

The view from my home in Nampasan

Even though I was an odd entity to the local Kadazan-Dusun Catholic community (middle age, unmarried, no children and only vaguely religious—maybe?), people welcomed me in their lives. There are people I like and love in my life, and then there are also people who influenced me in such a fundamental way that I know I would not be where I am today. My colleagues and host family are included amongst the latter group. I am grateful for having had the opportunity to meet so many people like that during my stay in Sabah. Thank you, terima kasih, dan kotohuadan.