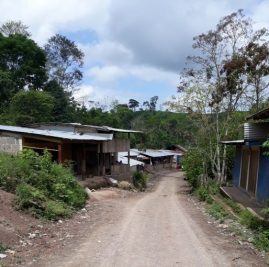 In late 2014, Green Empowerment and Nicaraguan partner organization Association of Rural Development Workers- Benjamin Linder (ATDER-BL) worked with the community of Pueblo Amado in Northern Nicaragua to install a gravity-fed potable water system to serve the 100 households in the village. As part of the project, ATDER-BL guided residents through a participatory process that revealed a need for improved sanitation. At the time, 60% of local households had no access to a latrine at all and depended on open-field defecation, while the rest had pit latrines built more than 10 years ago and in significant disrepair. While local health had been improved by the new water system, this situation threatened that progress, as open defecation can contaminate local water sources and cause diseases such as cholera.

The location of Pueblo Amado within Nicaragua

As a result of these findings, Green Empowerment and ATDER-BL decided to work with the community to design a new project that would improve the hygiene, sanitation, and health of the residents of Pueblo Amado, providing 100% of the population with access to improved sanitation facilities and reaching at least 85% of households with training in hygiene and sanitation.Project implementation began in May 2017. Working with the community’s Potable Water Committee that had been established in 2014 to manage the new water system, a general assembly of residents in Pueblo Amado was held to officially present the project, confirm families’ commitment to transport materials and assist in construction, and organize logistics to begin building.During this initial phase, the Pueblo Amado Potable Water Committee and ATDER-BL were approached by a neighboring uphill community, El Casino, requesting assistance in improving the sanitation situation for their community’s 52 households. Following discussions between Green Empowerment, ATDER-BL, and both communities, it was agreed to expand the project in include El Casino. Demonstrating the dedication of everyone involved, this expansion was made possible without increasing the overall cost of the project. The organizations reached out to the suppliers to explain the situation and asked to renegotiate the prices of the latrine walls, fiberglass seats, and latrine accessories. Recognizing the importance of improved sanitation for community health, the suppliers agreed to sell the materials at their best prices in order to benefit the two communities. As a result, an additional 52 latrines were built beyond the 100 that were planned for this project. 100% of the populations of both Pueblo Amado and El Casino now have access to improved sanitation, strengthening these rural villages and the region as a whole.

One of the newly constructed latrines

However, there’s more to improving sanitation, hygiene, and health than just providing access to toilets. People also need to know how to use them, why, and what to do afterward. That’s why Green Empowerment and ATDER also provide training on these topics, including latrine maintenance, the routes of contamination, and handwashing. The first hygiene and sanitation training with the community members took place in May through interactive workshops, presenting the need for and proper use of the latrines and basic hygiene practices. To further enhance the workshop, a nurse from the local Ministry of Health clinic participated by providing information about diseases caused by lack of access to sanitation, including parasites and diarrhea. Additional trainings and home visits to 100% of households were conducted to orient and sensitize families on the proper use of latrines and good household hygiene practices through early September.

A discussion with project beneficiaries as part of the final evaluation

A final evaluation of the project was conducted with community members, through a focus group to evaluate changes that generated impact on health, participation and community organization. The beneficiaries expressed their satisfaction with the support from the organizations involved, as well as pointing out the following changes that they’d observed as a result of the project:• Decrease in the incidence of gastrointestinal diseases such as diarrhea and parasites• Increased security and privacy by having a properly protected latrine (with walls), giving them confidence to know that they and their children are not being watched by othersIn addition to the construction of latrines and trainings, Pueblo Amado’s Potable Water Committee has been legally certified through the local mayor’s office, an achievement that is important to facilitate community and municipal management moving forward.Many thanks to Christadelphian Meal-a-Day Fund of the Americas, the AllPeopleBeHappy Foundation, and the Jonas Family Foundations for their generous support of this project!

Posted in Blog, News From The Field, Nicaragua, Sanitation, Water