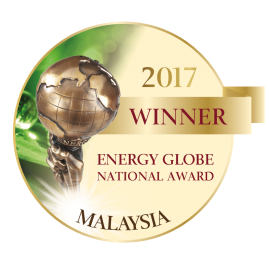 Green Empowerment’s program with partner Tonibung, “Building Climate Resilience through Renewable Energy in Borneo,” has won the National Energy Globe Award for Malaysia! With 178 participating countries, the Energy Globe Award is considered to be one of the most prestigious international environmental awards. It is awarded annually to projects focusing on energy efficiency, renewable energies, and the conservation of resources. This year the Energy Globe Awards received over 2,000 submissions. Green Empowerment’s rural electrification work in Borneo with our local partner Tonibung was chosen as the best project in Malaysia.GE has worked with Tonibung to alleviate energy poverty in Malaysian Borneo since 2000. The partnership has resulted in the installation of more than 20 solar and micro-hydro microgrids in rural indigenous communities serving more than 5,000 people, the establishment of a center to train indigenous technicians, and the development of a turbine manufacturing workshop. GE’s first project in Borneo, 16 years ago, is still functional today and is effectively managed by the local community – a testament to the GE approach, which puts tremendous value on developing local capacity through technical training and formation of community committees that own, operate, and maintain the system with backup technical support from our local partners. In addition to providing health, education, and environmental benefits, these renewable energy systems also provide economic benefits to the communities by enabling the establishment of small-scale businesses. By integrating renewable energy access with traditional indigenous resource management strategies, this program has powered thousands of homes, schools, clinics, and small businesses, while averting greenhouse gas emissions and conserving critical watersheds.

Unfortunately, several of the villages where we have worked are under threat to be flooded by the construction of government-sponsored megadams that would displace thousands of indigenous people and inundate thousands of acres of tropical forest. These dams are part of the state government’s mass-industrialization initiative known as the Sarawak Corridor of Renewable Energy, or SCORE. Under this plan, the government has proposed to build at least twelve new megadams in Sarawak in order to provide electricity for a yet-to-be-determined industrial sector in the state. One of these dams, constructed in 2011 on the Bakun River, displaced around 10,000 indigenous people, flooded 173,000 acres of pristine tropical forest, and failed to supply relocated villagers with electricity or clean water afterwards. Furthermore, the flooding of vast areas of land exacerbates the threat of extinction for endangered animal and plant species, while greenhouse gas emissions from rotting vegetation in the submerged areas outweigh that of coal plant emissions and could actually speed up climate change.

GE and other partners are supporting local activists in Ulu Papar to prevent the construction of megadams that would flood their communities.

Utilizing GE’s experience working at the intersection of technology and community development, we initiated collaborative research on local energy demand projections, environmental impacts, and potential alternatives to fight this destruction. Working with local activists and the UC Berkeley’s Renewable and Appropriate Energy Laboratory (RAEL), the group presented the research to the Chief Minister of Sarawak in 2015. Two weeks later, the minister announced a moratorium on dam construction and restored the native land rights of some of the villages.However, there’s more work ahead. GE will continue to support stakeholders in convincing the government to abandon or revise SCORE in favor of better alternatives, including by implementing additional renewable energy projects to use as examples of successful, environmentally safe, and scalable renewable energy solutions. Stay tuned for future updates on this important work!