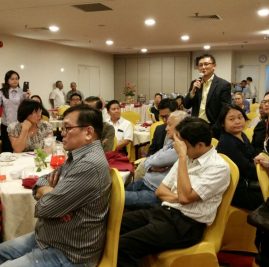 On August 16th, 2016, more than 90 members of academia, civil society, government, and the private sector met over lunch in Kuching (the Sarawak state capitol in Malaysian Borneo) to discuss the future of energy in the region. The consensus reached by the end of the dialogue offered hope and cautious optimism for indigenous people, environmental advocates, and renewable energy proponents around the state.Green Empowerment has been working with local partner Tonibung in Malaysian Borneo since 2000 to bring renewable energy to more than 20 rural indigenous communities. Several of the villages where we have worked were recently threatened to be flooded by the construction of the Baram Dam, a government-sponsored “megadam” that would displace thousands of indigenous people and inundate thousands of acres of tropical forest. The native land rights of the indigenous communities along the Baram River were revoked in 2015 by the Malaysian state of Sarawak for the planned construction. Nearby on the Bakun River, a similar dam constructed in 2011 displaced over 10,000 indigenous people, flooded 173,000 acres of pristine tropical forest, and failed to supply displaced villagers with electricity or clean water afterwards. Both projects are part of the state government’s mass-industrialization initiative known as the Sarawak Corridor of Renewable Energy, or SCORE.

Under this plan, the government proposed to build at least twelve new megadams in Sarawak in order to provide electricity for a yet-to-be-determined industrial sector in the state. The ongoing devastation from the Bakun Dam prompted local organizations and indigenous leaders to join together to fight further megadam construction in the area.Utilizing Green Empowerment’s experience working at the intersection of technology and community development, we initiated collaborative research on local energy demand projections, environmental impacts, and potential alternatives. Working with the University of California (UC), Berkeley’s Renewable and Appropriate Energy Laboratory (RAEL) and local partner organizations, we presented the research under the title “Sarawak Energy Options Reports” in June 2015 to the Chief Minister of Sarawak. Two weeks later, the minister announced a moratorium on dam construction and restored the native land rights of communities along the Baram River—a huge win for indigenous communities and the environment!Seizing the window of opportunity offered by this success, Green Empowerment helped to organize an energy forum that brought together international experts, private sector representatives, local non-profits, indigenous groups, and policy decision makers to discuss how stakeholders could collectively realize the alternatives that had been presented to the Sarawak Chief Minister.Highlights from the energy forum included a keynote address from Dr. Daniel Kammen, Professor of Energy at the University of California, Berkeley, discussing how international leaders in other countries are making a commitment to clean energy transitions, and where they are finding support; a detailed presentation from Dr. Rebekah Shirley, Postdoctoral Researcher in the Energy and Resources Group at UC Berkeley, on the findings of the Sarawak Energy Options Reports; examples of local success stories presented by Adrian Lasimbang, Executive Director of Tonibung, sharing the combinations of technologies and approaches that address challenges met by energy developers; and finally, a presentation from Gabe Wynn, Green Empowerment Asia Regional Director, about the community-based approach to electrification, how it ensures long-term success, and how policy-makers could encourage better rural electrification practices by rewarding locally developed, sustained operations.

After the forum, the group met with influential policy makers to discuss scaling up energy access in Sarawak, and the conservation case for further micro-hydro development.So, where to go from here? Well, we have some ideas. As this recent activity demonstrates, there is incredible potential for renewable energy projects to drive community development in Malaysian Borneo while protecting indigenous land rights and the ancient forests. Green Empowerment will continue to play a leadership, facilitation, and resource role for our partners and key stakeholders. As these conversations evolve, we will work to find additional resources for community renewable energy projects, as well as opportunities to further integrate social justice and environmental conservation into the projects. We’ll also continue to engage with private sector actors and policy makers to ensure that successful models are recognized and replicated where appropriate. You can learn more about this important work in the video below, and you can support these efforts by making a donation today!