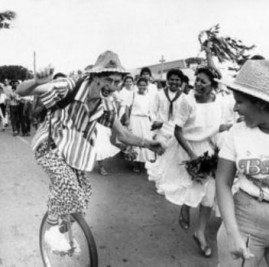 By Mike KalkofenThe desire to do something meaningful and help people. You hear it a lot these days, especially in the career marketplace, and I can relate because it was an important theme in my job search. Although many people talk about it as if they’re enlightened and it’s something new, it’s been inspiring and motivating people for a long time. I just finished reading the story of one such person who felt that passion and desire over thirty years ago; Ben Linder, an aspiring young engineer whose work inspired the founding of Green Empowerment.Ben was raised in Portland, OR and graduated from the University of Washington, with a degree in mechanical engineering. He wanted to do something meaningful and use his skills and knowledge to help people and was inspired by the Sandinista revolution in Nicaragua and the new government’s efforts to improve living conditions in the country. Ben moved to Managua, Nicaragua after graduation, in summer, 1983.Ben Linder was famous for riding his unicycle around Nicaragua, it was a great way to connect with the local population.Ben left his friends, family and everything else that was familiar to try to make a difference in the world. He ended up in the remote village of El Cuá, where, in addition to other programs, he helped complete a small hydroelectric plant that brought electricity to the village. When the El Cuá project was successfully completed, Ben and his team started a similar project for the nearby village of San José de Bocay.Unfortunately, Ben’s time in Nicaragua coincided with the United States’ support of the Nicaraguan Contras. The Contras were funded by the U.S. government and trained and directed by the CIA, with a core part of the Contra strategy being to destroy health clinics, power stations, and the infrastructure that citizens, international volunteers and the government depended on. Tragically, Ben’s life was cut short on April 28, 1987, when he and two Nicaraguan colleagues were killed in a ContraBen Linder Blog ambush as they prepared to work on the San José de Bocay project.

Ben’s time in Nicaragua is chronicled in Joan Kruckewitt’s 2001 book, The Death of Ben Linder. Although it provides an interesting look at U.S. foreign policy of the era, more than anything, it gives insights into the mind of an idealistic young man coming of age and finding his place in the world. Anybody that’s moved to a new city can relate to Ben’s feelings of angst and loneliness as he attempts to make friends and fit in with the local culture. Although he initially struggles to find a job and questions if he’s doing the right thing, he eventually finds his niche and extends his stay in Nicaragua. Distance, time, and evolving personalities and passions eventually take a toll on several of Ben’s relationships; losses that were clearly painful. Ben eventually found his place, accepting the challenges and hardships as the price to be paid for making a difference in the world. Sadly, he also paid the ultimate price for his ideals.Green Empowerment continues to work with the Association of Rural Development Workers- Ben Linder (ATDER-BL) in norther Nicaragua.

As I read about Ben’s journey, I felt similarities with my life. After bouncing around a bit, I found my home when I settled in Portland, OR in late 2009. Part of my move included a dream to transition into a career in the nonprofit sector, where I could feel like I was making a difference. Much like Ben, there’s been moments of happiness, sadness, and personal reflection along the way. I realized my dream in June, 2015 when I became the Financial Manager for Green Empowerment.I’m proud to be part of Green Empowerment, continuing the work of Ben Linder, and empowering villagers around the world to improve their lives. Unfortunately, nearly 30 years later, Ben’s work is far from complete; worldwide, an estimated 900 million people still live in extreme poverty, while an estimated 1.3 billion people are living without access to electricity. Ben couldn’t accept these injustices and neither can I. I feel a certain connection and kinship with Ben, Green Empowerment, and the GE family, and I’m honored to be carrying on the work of Ben Linder.

Posted in Blog, News From The Field, Nicaragua, Water