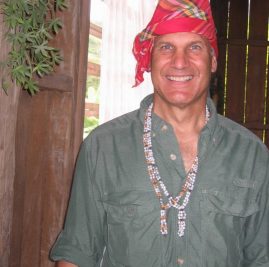 Green Empowerment invites you to join us in celebrating our founder and community leader Michael Royce!You might say that activism runs in Michael’s family. Born to Henry Ruess, a Democratic Congressman from Wisconsin who was the author of the legislation that created the Peace Corps, and Margaret Reuss, a political, social and environmental activist and chair of the Economics Department at the University of the District of Columbia, Michael was raised with strong moral role models and always felt called to improve conditions for people who were less fortunate.However, it took him a while to figure out exactly how to fulfill that call. After graduating from high school in 1964, he left the life he knew to travel to Mississippi and support the battle for civil rights. This experience left a deep impression on him, and would help lead him down the path of lifelong activism.

For the next few years Michael held a series of odd jobs, including a two-year stint as a community organizer in Kentucky, before deciding to pursue a legal career. This wasn’t an easy choice, as he and his wife, Francie, already had a family to raise. Their third child was born on the first day of Michael’s law school class at Lewis and Clark, and so for a few years life was hectic for them. Michael drove a school bus in the morning and after school, while Francie worked nights as a janitor at Portland State University (PSU). But the couple persevered, and it was at Lewis & Clark where he met Doug Swanson and Ray Thomas. The trio graduated in 1979, and a year later started what would become one of Portland’s top product liability firms, Royce, Swanson, Thomas & Coon (now Swanson, Thomas, Coon & Newton).In his legal career, Michael put his values into practice by consciously forming a law firm that would be politically and socially active, trying cases involving workers’ compensation, disability law, refugees’ rights, and Social Security issues. He also specialized in product liability, primarily cases in which people were being harmed by toxic chemicals. One of his most memorable cases involved a million-dollar victory for a client who suffered heavy metal poisoning from a water heater.

Despite a successful run in the courtroom, Michael felt compelled to do even more; and in 1995, at the age of 50, he left the firm to found Green Empowerment. Since then, he has partnered with the likes of novelist Barbara Kingsolver to promote the need for renewable energy sources, and has traveled to Nicaragua, Ecuador, Guatemala, the Philippines, Malaysia, and Indonesia to work with local partners developing small renewable energy and clean water projects to empower rural communities. After 10 years as GE’s Executive Director, he transitioned out of active management and assumed a role on the Board of Directors, helping guide the organization with the wisdom gained through his years of diverse activism experience.At the end of this year, 19 years after founding Green Empowerment, Michael is turning 70 and stepping down from the Board of Directors. Though officially retiring, his dedication and commitment to GE will continue to support the organization as he takes on new roles as volunteer, advocate, and mentor.Please join us in celebrating the amazing work and life of Michael Royce as we seek to raise $70,000 to create the Michael Royce Fund, honoring his 70th Birthday and his inspiring commitment to social justice, environmental stewardship, and community empowerment in Portland and beyond.

The funds will go to Green Empowerment projects to continue the important impact that Michael initiated in 1997 with the vision of an equitable and sustainable world where everyone has clean water, renewable energy, and a healthy environment in which to grow and thrive. We invite you to contribute to this effort by joining us at the Michael Royce Birthday Extravaganza on Sunday, November 6th at 5:30pm, or by donating online.Thank you, Michael!!Reference: Finnemore, Melody. “From the Courtroom to the World.” Oregon State Bar, July 2003.