After the Flood Along Rio Beni 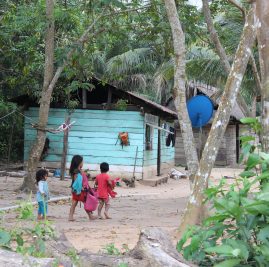 Nestled in the jungle of Rurrenabaque along the vast Rio Beni, live several indigenous communities. These communities live off the land, have limited income and are heavily affected by natural disasters. In 2014, an immense flood washed away homes, destroyed crops and livestock, caused large outbreaks of disease and left many dead.Thirty kilometers north of Rurrenabaque, the indigenous Takana residents of Puerto Yamani still lack basic infrastructure and services. During the flood, a meter of water entered the community, causing extreme isolation during their time of need. Weeks later, the water receded and many community members relocated permanently to other cities. Deep fractures in the community emerged; fractures that still affect their ability to organize and achieve positive change on a community scale.

The community also lacks clean water. Their local water source is heavily contaminated with pesticides and herbicides used on the failing industrial-scale sugarcane plant developed by the Bolivian government. Community members tell stories of how local rivers once supplied them with fish and water, but now the fish are dead and the water is full of agricultural runoff that makes them sick.Green Empowerment and Soluciones Practicas-Bolivia (or Practical Action-Bolivia) are working with local government to install new potable water systems and perform water system rehabs in Puerto Yumani and seven other communities along the Rio Beni. These communities have varying degrees of water supply infrastructure, but no water considered potable by international standards. Community members are working alongside experts and engineers under the harsh sun, mixing concrete, forming rebar stands, digging holes and installing water lines. They are attending community meetings on household hygiene topics such as water storage, latrine use and handwashing. They are also forming water committees to manage the operation, maintenance and administration of their systems.It is inspiring to see people facing the some of the world’s most pressing challenges work in solidarity to improve their quality of life, and the lives of future generations. Stay tuned for more project updates in the near future.

Posted in Blog, Bolivia, News From The Field, Sanitation, Water