Adapting to Change in Kampung Terian 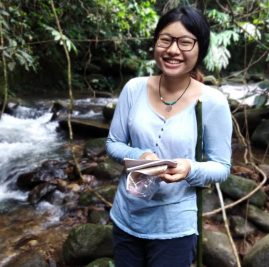 By Jesica Sutandi, our Intern based in Malaysian Borneo working with local NGO partners TONIBUNG, PACOS and Forever Sabah.

I’d been lying on the bed under my mosquito net listening to the heavy fall of the pouring rain after a whole day of celebrating the Kaamatan festival. I opened the door and slipped on my sandals, headed for the steps to use the bathroom downstairs, but instead of the next stair, I found myself at the banks of a swelling, brown river. The whole first floor of the workshop had flooded to waist-level.

The flooded workshop at 9 p.m.

“I guess… I’ll just hold it in.”It was my fifth day in Sabah, Malaysia, and the Moyog river that borders the kampung (village) I was living in had decided to give me a warm welcome. This was the worst flood in four years, and my colleagues said that these extreme floods are becoming a more frequent occurrence. In the past, the Penampang area, where I live, used to be extensive floodplains and padi fields, which were able to absorb millions of gallons of floodwater. Today, as modern development has covered the fields with concrete and asphalt in the form of roads, houses, and shopping centers, the floodwater has nowhere to go. Traditional homes were built on stilts, but, influenced by western perceptions of development, today’s houses are grounded; thus, many houses in kampungs were completely flooded. Many other factors contributed to this flood, including an inadequate drain system and deforestation, which led to damaged soil, an increase in erosion and mud flowing into the Moyog river and rising water levels. Everyone in the workshop spent the next morning cleaning up the flood damage; scrubbing muck off the floors, walls and workshop equipment. It took about a week to fully recover. Our neighbor and students next door also came together for the gotong royong (mutual cooperation), and prepared food for us as blocked roads made leaving the village impossible.I understood on an intellectual level that climate change affected people’s lives, but this firsthand experience made me realize what it actually means in the real lives of real people. Climate change isn’t just a little bit more mercury in the thermometer each day – it’s storms that flood people’s homes, it’s sea level rise that drowns islands, it’s droughts that lead to mass migrations and civil wars. The need to protect community watersheds and build resilience is greater than ever.

One kerbau (buffalo) grazing on a fine morning in Kg. Tiku.

I learned more about change in Malaysian Borneo in July, when I traveled to Kampung Terian with TONIBUNG (An acronym for an expression in one of the native communities’ language, Dusun, which means ‘Friends of Village Development’). TONIBUNG is a local organization that addresses rural electrification by helping communities build and manage their own micro-hydro power systems. Kg. Terian’s system was first constructed in 2003. The system worked for 10 years until a landslide occurred on the forebay, and then a second landslide occurred only a year after the first repair. The second repair was scheduled to be completed in July, but was drastically behind schedule. During our visit to Kg. Terian, we hoped to discover why this was the case.The road to the village was not easy. Using a car, we crossed rivers and uneven, muddy terrains, occasionally stepping out of the car to push from the back while someone floored the gas pedal and steered sharply away from the trench we were stuck in. Once we reached a point where the car could go no further, we walked for about 40 minutes before finally arriving in Kg. Terian.

The road to the village.

The villagers were very welcoming during our stay. They offered us homemade drinks when we entered their homes. They lived at a different pace than I was used to, had different priorities. For them, community and harmony were most important.When the sun set, the village was nearly pitch black. The only light came from a few bulbs on the decks of the dispersed houses. But still, people gathered – all made up, laughing and playing music on their guitars, lively as ever. They were curious to know where I came from and responded warmly to my questions about their lives.In one of the homes that I visited during the night, two elderly couples were weaving rattan to make a basket called barait to collect wheat and other crops. When I asked one of them if she could teach me how to weave the rattan, her eyes looked at mine with deep ancestral knowledge. She smiled, and said that she would love to. Everyone in the room was warm and welcoming. They had a spirit and comfortableness in their space that showed they had been there for generations and generations, and they did not plan on leaving.

Lady from Kg. Terian teaching me how to make the tali (rope) of a barait basket using rattan.

Remember the road coming into the village? My colleagues said that conditions were “about 100 times better” than what they had once been. The government built a network of roads to the village about four years ago, but with it came the rubber industry that used some of the villagers’ land to plant rubber trees. Villagers had mixed feelings about the development. Some welcomed the new economic opportunities and transportation routes that came with it. Others struggled to balance earning a wage and retaining their traditional culture.Many villagers sent their children to school in the city with the wages they earned from new industries. In most cases, parents moved with their children, leaving only the elderly and little ones behind to sustain the village and its traditions.I then understood why no one had gone to the gotong royong to fix the forebay in the micro-hydro system. Most of the villages young and active residents had left to seek opportunities in the city.

In most kampungs, a similar pattern has emerged: as young people move to the city, their adat (way of life) has slowly eroded, much like the shores of the Moyog River. As someone who is currently studying renewable energy systems, I learned that energy is a means to an end, not the end itself. Energy access is important, but it’s only a piece of the larger puzzle of land conservation, livelihood generation, cultural retention and more.The micro-hydro system that I visited allows villagers to earn money during the day, and continue their cultural traditions by lamplight during the night. By generating electricity through micro-hydro, rather than diesel, villagers are also incentivized to protect the watershed that powers the system. We hope that by bringing renewable energy to the village, young people and their families will be encouraged to stay.But this is a complex issue, and we need more people thinking about these challenges and persistently doing something about them. These projects may take months, even years. But as I learned from the partnerships between communities, NGOs, local government and businesses, taking the time to listen to one another matters most.